You could also attract these beneficial insects to your organic gardens, landscapes and fields by planting flowers and herbs such as Angelica, Coriander/Cilantro, Dill (Fig. 3.), Fern-leaf Yarrow, Golden Marguerite, Marigold, Thyme etc.

The scientific name of predatory bigeyed bug is Geocoris spp, which belongs to an insect order Heimptera. This insect received a common name “Bigeyed bug” because of its big bulging eyes. The young stages of bigeyed bug are called as nymphs. Both adult bugs and nymphs are predatory in nature and feed on both young and adult stages of aphids. The bigeyed bug also feeds on eggs of different insects, small caterpillars, flea beetles (Fig. 4), mites, thrips and whiteflies (Fig. 5).

Damsel bugs are also belongs to an insect order Hemiptera and scientifically recognized as Nabis spp. Both adults and nymphs of damsel bugs feed on many small insects including aphids, eggs of moths (Fig. 6) and butterflies (Fig. 7), leaf hoppers, small caterpillars of imported cabbageworms (Fig.8) and other Lepidopterous insects, red spider mites and thirps. Damsel bugs are very common in field crops such as soybean and alfalfa and also in different fruit orchards.

Lacewings are scientifically called as Chrysopa spp. This predatory insect naturally found in agricultural fields, organic gardens and various landscapes. These insects are commercially available as beneficial biological control agents for the management of pest problems in greenhouses and in organic gardens.  These predatory green lacewings are active during night and feed of on many kinds of small soft bodied insects such as aphids, mealybugs, mites, caterpillars, thrips and whiteflies. They also feed on eggs of different insects.

Ladybugs are also called as ladybird beetles and scientifically recognized as Hypodamia convergens. Adult ladybugs are hemispherical shaped and bright orange to red in color with 6 black spots on each wing (Fig. 9).  Larvae have appearance like an alligator with yellow stripes and reddish dark brown color (Fig. 10).  Both larvae and adults of lady bird beetles are active predators of many soft bodied insects including aphids, mealy bugs, mites and scale insects.  Although lady bugs are naturally occurring in your organic gardens, they are also commercially available as biological control agents that can be introduced in your organic garden at a large numbers for supplementing existing populations of ladybugs to achieve effective control of noxious insect pests.

Pirate bugs are also predators of many soft bodied insects such as aphids, mealybugs, mites, scale insects and thirps. They also feed on eggs and small caterpillars of moths (Fig. 6) and butterflies (Fig. 7). Pirate bugs are scientifically known as Orius spp. and belong to an insect order Hemiptera. These insects have piercing and sucking type of mouthparts that they use to suck body content of their host insect or prey.  Pirate bugs are commercially available as beneficial biological control agents.

The common name of syrphid fly is hover fly or flower fly and it belongs to an insect order Diptera. Because of their appearance, you can easily confuse them with bees or wasps. Unlike, honeybees or wasps, these Dipterous flies have only one pair of fore wings. The larval stages of hover flies are called maggots, which are legless and predatory in nature. Maggots feed on many soft bodied insects such as aphids, small caterpillars and thrips. Adult are not predators and feed on only nectar.

The parasitic wasps belong to an insect order Hymenoptera and scientifically known as Aphidius colemani. These tiny parasitic wasps are commercially produced and sold as biological control agents that are specifically used for the control of aphids (Figs. 1 and 2).  Adult wasps lay their eggs in aphids.  These parasitized aphids die and their body becomes hard and turns bronze in color. These bronze colored aphids are termed as “aphid mummies” (Figs. 11 and 12).  Inside these mummies, wasps complete their lifecycle and then emerge as adults by chewing a round hole in aphid body. These wasp adults then seek new aphids for laying eggs. 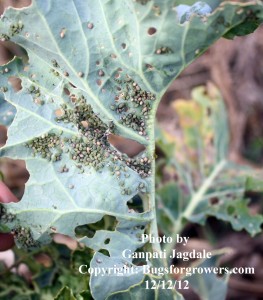 Fig. 11. Several green colored aphid are seen a collard green leaf are live but some of them are in bronze/brown in color are dead because they are parasitized by parasitic wasps. The parasitized aphids are called as “aphid mummies”. Click the image for a enlarged photo