Fleas are small wingless insect pests of dogs, cats, humans and rats. Since fleas do not have wings, they can disseminate only by jumping from one host to another host. Fleas use their piercing and sucking type of mouthparts for sucking of blood from their hosts like dogs and cats. In addition, fleas transmit diseases like flea allergy dermatitis to dogs (Photo 1). This disease causes dog hot spots that are basically infected circular patches of skin. Since these hot spots are very itchy, dogs continuously keep them scratching and biting, and turning them into big wounds. Only adult fleas are capable of feeding on the host blood, transmitting diseases and causing direct damage to their hosts whereas their larvae are not harmful as they cannot feed on host’s blood or transmit diseases. 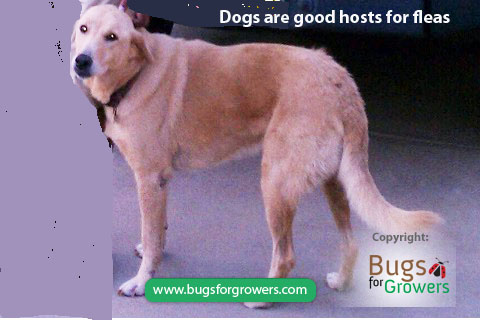 The life cycle of fleas is very simple. They develop through four different developmental stages including eggs, larva, pupa and adult. Fleas lay eggs on dog’s body but these eggs fall off on the ground where dog usually rests or sleeps. Eggs hatch within 1-2 weeks into small larvae and begin feeding on organic matter. While feeding on the organic matter, larvae develop through three larval stages. The matured larvae then pupate inside the silken cocoons in soil.  Adult fleas generally use cues like carbon dioxide, heat and vibration from their hosts to emerge from cocoons. The emerged adult fleas then hop on the host’s body whenever their hosts are visiting their resting and sleeping place. Once on the host body, fleas feed on the host’s blood, mate and lay eggs. Eggs fall off of host on the ground and life cycle continues. Fleas complete several generations during summer through the fall season and then overwinter as larvae and pupae in the soil mostly at the resting place of their host animals like dogs.

Since fleas are serious pests of dogs and cats, timely control of population of fleas is essential to protect dogs and cats from diseases transmitted by fleas.. Application of chemical pesticides on the resting places of dogs to control fleas can not be a safe option because of their detrimental effects on dogs, cats and owners of pets.. Currently, beneficial entomopathogenic Steinernema carpocapsae nematodes are used as alternatives to chemical pesticides for controlling fleas. This is because these nematodes are easy to apply and they can kill both larval and pupal stages of fleas with 48 hours after their application.

Briefly, when Steinernema carpocapsae nematodes (Photo 2) applied on the resting and sleeping area of dogs, they search, infect and kill all the soil-dwelling larval and pupal of fleas. Once applied nematodes come in contact with either larvae or pupae of  fleas, they enter into their body cavity through the natural openings like anus, mouth and spiracles and release symbiotic bacteria (Xenorhabdus nematophila) in the blood. In the blood, bacteria multiply quickly, cause septicemia and kill larva or pupa within 48 hours of infection that in turn completely stops the emergence of next generation of fleas. 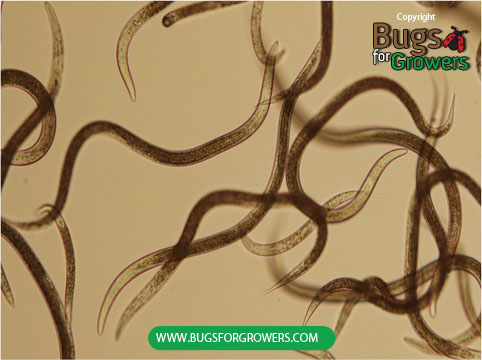 To target both larval and pupal stages of fleas, apply Steinernema carpocapsae nematodes using watering can (Photo 3) on the areas where dog generally rests or sleeps. The optimum rate for the effective control of fleas is 23,000 nematodes per square foot area. As nematodes need a film water for their easy movement in the soil, make sure that the treatment areas are irrigated before and after application of nematodes to maintain the optimum level of moisture in the soil. Also make sure that nematodes are applied either early in the morning or late in the evening to their exposure to UV radiation as its short exposure can kill nematodes instantly. 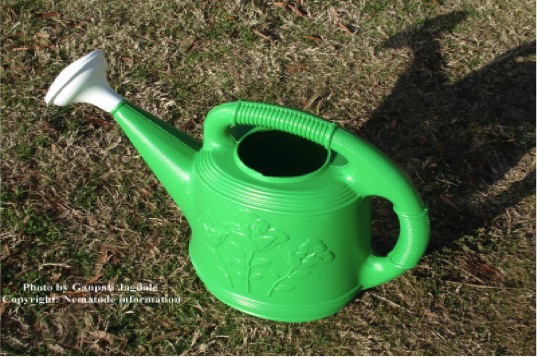 Photo 7. Watering can for the application of beneficial nematodes

Use following table to apply correct numbers of nematodes to treat specific size of area for the effective control of fleas.