Whiteflies are about 2-3 mm long tiny insects with yellowish bodies, white colored wings and piercing and sucking types of mouthparts. Adult whiteflies generally gather on the underside of the leaves where they mate. After mating, females lay over 200 eggs on the lower surface of leaves. Eggs hatch within 7 days into pale to translucent colored and wingless nymphs. These nymphs develop through four developmental stages (instars). The first stage individuals are called ‘crawlers’ because they have well-developed legs for crawling on plant surfaces and antenna for locating permanent feeding sites on the underside of leaves. After finding a suitable feeding site, crawlers enter into the second stage nymphs, flatten and become legless. These nymphs then become immobile by attaching themselves to the selected feeding site by inserting their mouthparts into leaf tissue where they continuously feed for about 3-4 weeks. While feeding, nymphs molt twice into the third and fourth stages (instars) and then form pupae. After 7-10 days, adult whiteflies emerge from pupae and the life cycle continues. Although adult whiteflies live only for a month, they can complete several generations during the growing season of host crops. 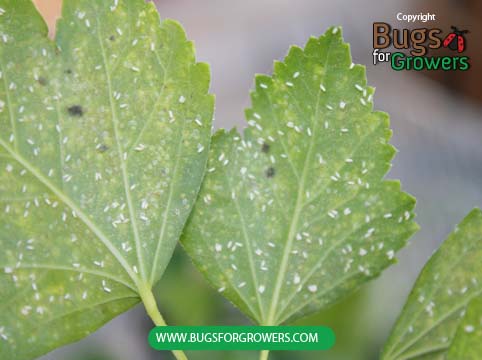 Whiteflies are known to cause both direct and indirect damage to their host plants which include various types of vegetables, ornamental plants, fruits and field crops.

In the case of direct damage, both adult and nymphal stages use their piercing and sucking types of mouthparts to suck cell sap from the underside of leaves of their host plants. Heavy feeding by whiteflies generally causes yellowing of leaves that eventually dry and fall off prematurely from the plant. Also, plants, which are heavily infested with whiteflies generally look unhealthy and eventually die off prematurely.

In the case of indirect damage, whiteflies, while feeding, secrete honeydew that stimulates the growth of black sooty mold on the surface of leaves. This black sooty mold covers the whole leaf and badly affects photosynthesis, a process used by plants to convert light energy from sun to chemical energy for the synthesis of their own food. This black sooty mold also reduces the quality of the produce and aesthetic value of many ornamental plants. In addition, whiteflies are known to transmit different types of diseases causing plant viruses, which are responsible for tremendous economic loss to the agricultural, horticultural and greenhouse industries. 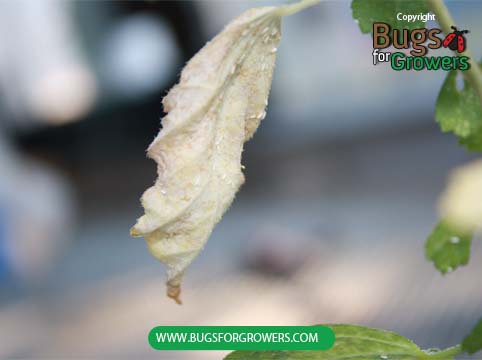 Several chemical insecticides have been recommended for the effective control of whiteflies. However, their use in the greenhouses and organic gardens is restricted due to their detrimental effects on the human health and environment. Therefore, there is a need to find alternatives to chemical insecticides to manage whitefly problems. Biological control agents like predatory mites, Amblyseius swirskii have shown a potential to manage whiteflies without compromising human health and the environment.

What is the predatory mite, Amblyseius swirskii?

Adults of the predatory mite, Amblyseius swirskii are pear-shaped, about 0.5 mm long with four pairs of legs. Female mites lay oval-shaped, 0.15 mm long and pale-whitish colored eggs on the lower surface of the leaves. After hatching from eggs, larvae start feeding on the thrips and develop through three developmental stages and then become adults. Since the optimum temperature required for the normal reproduction and development of Amblyseius swirskii is between 20°C (68°F) and 29°C (84.2°F), they are considered to be ideal biological control agents for controlling thrips in US greenhouses where temperatures often exceed 25°C during summer.

Amblyseius swirskii mites are commercially available as mixed populations of adults and larvae and are currently used as a biological control agent for controlling tiny pests, which cause serious damage to many economically important crops. Both larvae and adults of Amblyseius swirskii are predatory in nature and can be easily released in greenhouses. Since these predatory mites are very active, they can disperse quickly after their application in the greenhouses where they will locate and start munching on whiteflies. Many researchers have demonstrated that each adult predatory mite can consume 15 larvae of whiteflies or 10 eggs of whiteflies per day. It is also well know that under favorable environmental conditions these mites can recycle continuously in the greenhouses as long as there is enough food around, and help to keep the whitefly population under the economic threshold level. For the effective control of whiteflies it is recommended to release over 5000 predatory mites per acre 2-3 times on a bi-weekly basis. Predatory mites can be released as a preventive measure before the occurrence of pests or as a curative measure after the incidence of pest mites. These warm adapted predatory mites perform better when they are released at optimum temperature mentioned above. The activity of Amblyseius swirskii mites will be reduced if they are released under cooler conditions. Also, these mites will not survive under really cold and frosty temperatures.